Silay Institute’s marketing team which was composed of the program heads. Dr. Mae B. Ferraro of the BSBA Department and Mr. Frederick O. Villaluna of the BSCS Department and Ms. Fredaline “Bambi” Delabanda, an HR officer of ADEC-Silay conducted an enrolment campaign last 220 February 2014 to all the graduating high school students of the Doña Monserrat Lopez Memorial High School, the biggest high school in the city with more than 6,000 students during the S.Y. 2013-2014
The S.I. group along with the talented students from both high school and the college were warmly welcomed by the faculty and students of the D.M.L.M.H.S. Ms. Bambi clearly and vigorously introduced Silay Institute, Inc., the program offerings, the scholarships as well as the better career opportunities being offered by the school to all the graduating students. Mr. Ruem Delilan, SSC President and Mr. Jazson Tapalla, BEEd Society President, facilitated the games after the talk which was then followed by the most applauded showcase of talents of the high school and college students.
The most enjoyed part of the program was the giving out of prizes for the program was the giving out prizes for the games and question and answer part which were the 2GB flash drives, eco-bags, and ballers.
To the graduates of D.M.L.M.H.S., thank you and see you in Silay Institute, Inc. this Academic Year 2014-2015. 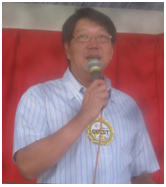 School President, Mr. Alfonso F. Gamboa, shed light on the spreading issue of the school’s cessation as an educational institution and total conversion to a BPO company in his speech during the 89th alumni homecoming activity last 15 February 2014. He assured all the alumni present that Silay Institute will remain as an educational institution and will continue to exist for 89 more years. The said statement of the President relieved the alumni from their alma mater and expressed their appreciations to Mr. Gamboa for personally delivering the good news. A warm and loud applause followed the speech as audience’s way of showing appreciation to the president.
Also present during the program were Dr. Rosario J. de Guzman, the School Director, Mrs. Lilian Reventar, Director of BPO Asia Institute (BAI), a member of ADEC Group of Companies and the keynote speaker for the said homecoming, Mr. Arnel G. Esguerra Site Director of ADEC-Silay, Ms. Marife Ferrer, HR Manager and Ms. Ferdalene Dela Banda, HR Officer of ADEC-Silay. Togather, they proved how serious the partnership is in bringing the school to a higher level.

Silay Institute, Inc. in celebration of its 89th Founding Anniversary, held a first ever Fun Run activity last 14 February 2014. The 5K run which started at 6:00 o’clock in the morning at Seaview Subdivision and ended at Silay Institute grounds were participated in by the high school and college students, parents faculty and staff as well as by other fun run enthusiasts like the “Team 6116 Runners” with Mr. Ryan Gamboa, a stakeholder and former member of the school board as one of its runners along with his wife Carmela Gamboa, a famous ABS-CBN, Bacolod TV Host.
Winners for the adult category were: Wilfredo Maraay – 1st Place, Marlon Baal – 2nd Place, and Stephen Diocadez – 3rd Place; for student category, winners were Juanito Biaco – 1st Place, Stephen Lingaya – 2nd Place, and Jioquito Peruelo – 3rd Place.