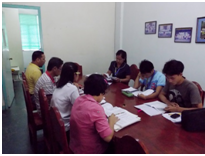 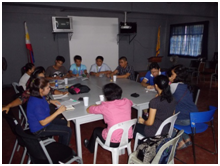 and staffin the two days review of the students’ handbook held last 16-17 October 2013 at the audio-visual room. Among the topics reviewed and actively participated in by the student representatives were the Student Scholarships and Tuition Aid, Student Discipline, and Student Services. The revised and enhanced students’ handbook for 2014 to 2017 which will be distributed to all the students will serve as a guide and direction towards a better and satisfying college life experience in the school.

A two-day campus journalism seminar workshop for the new members of the college publication, The Scribblers, was held last April 3 and 4, 2014 at the Audio Visual Room of Silay Institute and at the CICM, Talisay City for the culmination of the workshop. The purpose of the said activity was to orient the new writers on the Campus Journalism Act, the functions of the staff, student paper and the student publication as well as to teach them on how to write good and effective news articles and stories putting emphasis on responsible writing or journalism.
Among the students who attended and actively participated in the said activity were the 10 new writers from the different college programs namely: Nelly Caballero (BEEd), Hazel Osano (BSBA), Marmi Alcudia (BEEd), Gladys Semeniano (BEEd), Kasthrina Abainza (BSCS), Sheena Santiago (BSCS), Edmar Perdigosa (BEEd) and Richard Panes (BEEd).

To the new Staff, congratulations and welcome to the “THE SCRIBBLERS”!

“My Teacher, My Hero” this is the simple yet very meaningful saying to all the teachers around the world. One month before the World Teachers Day, the SSC officers headed by the SSC adviser Mr. Jocen Angeles, SSC presidents Ruem Delilan as well as the students of Silay Institute were hectic preparing to give tribute to all the teachers of Silay Institute. The said event was held at the S.I. Quadrangle last October 03, 2013. The SSC was prepared surprise number like Teacher look alike and that was choreograph by yours truly, there was also a slideshow where all of the students give their message to their respective teachers. One of the numbers presented was the poem of Paul Perez and it was made by yours truly as well. The SSC also prepared a raffle were Miss Detera, Mr. Abellar and Mr. Sazon luckily got the prize. But what caught my attention was when all of the students give their simple gifts yet heartily given to their teachers. after the program all the teachers proceed to the AVR for the Dinner were all the teachers were surprised by the dinner prepared by the SSC officers.
By: Chat